Singapore isn’t an Asian destination that comes to mind when most travelers begin planning their Asian beach vacation. You might be surprised to know that despite its ultra modern facade, the beaches in Singapore are unique and beautiful.

Singapore is comprised of islands, and while its rapid urbanization caused the disappearance of many of its natural beaches, the man-made beaches and parks that have been formed along newly reclaimed land are no less impressive than Singapore itself. The government has spent a lot of money on developing Singapore and its islands; billions have been spent on beautification campaigns.

While you might not think that Singapore’s beaches compare to beaches in the Philiipines or Thailand’s beaches, you won’t be disappointed by what’s on offer in Singapore.

The main island of Singapore has a number of public beaches…

This 185-hectare beach park is located on the southeastern coast of Singapore. The park opened in the 1970s after the government reclaimed land off the coast of Katong. The area covers Changi to Tajong Rhu. East Coast Park serves a number of communities in the area, such as Tanjong Rhu, Bedok, Marine Parade, and Tampines.

The park is the largest in Singpore, and it is a popular gathering place for family and friends. You’ll find barbeque pits, food and beverage stands, beach chalets, and other amenities for outdoor activities in the area.

There are cycling and inline skating tracks running along the perimeter of the park. East Coast park is connected to Changi Beach Park by the Coastal PCN, which is an 8 kilometer park road that runs along Changi Coast Road.

A 15-hectare park that is located in Sembawang, this beach is found in the north of Singapore and faces the Straits of johor overlooking Malaysia. It’s located at the end of Sembawang Road. The park gets its name from the Sembawang Tree, which can be found at the center of car park C1. This park boasts many interesting features that are connected to Singapore’s historical past.

Sembawang Beach is one of the few natural beaches left in Singapore. The water is clean with mild waves. There are a number of barbecue pits in the area, making it a popular day trip for families and friends.

The Sembawang Shipyard is located on the west side of the park. This was His Majesty’s Naval Base (H M Naval Base) of the British Royal Navy from the 1920s. Sembawang Jetty was constructed in the 1940s and later abandoned during the Japanese occupation. Today it is a popular fishing area.

Beaulieu House was constructed in the 1910s as a seaside home for the David family. It served as a residence for senior engineers during the construction of the Sembawang Naval Base. Today, the house is used as a seaside restaurant and as a wedding and party venue.

To get to Sembawang Park, take the MRT to Sembawang Station. The park is accessible from SMRT bus service 882, which loops around at the former Sembawang Road End Terminal. 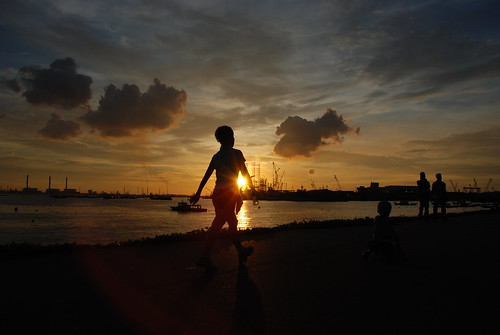 West Coast Park in Singapore is located on the West Coast. It runs parallel to West Coast Highway and covers and area of 50 hectares. There are lots of things to see and do in West Coast Park, but if you’re looking for miles of beachfront, you’re best off going somewhere else. This is more of a kiddie park. Expect to see lots of boats and tankers on the horizon if you’re visiting this park. 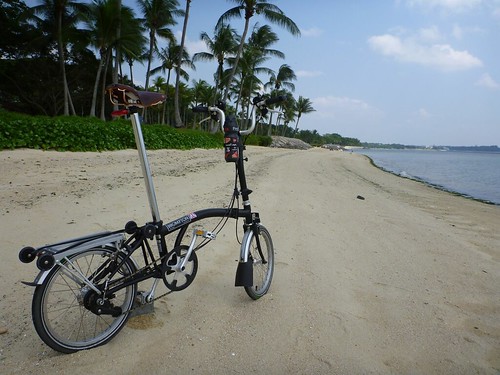 Pasir Ris Park is a 71-hectare park that opened in 1989 in the eastern part of Singapore. It’s one of the largest coastal parks in Singapore. It runs for 6.6 kilometers and boasts a 6-hectare mangrove forest within its boundaries. Vistors can explore the forest from wooden boardwalks.

The park also features a small beach, a cycling track, barbecue pit, and picnic tables. There is also a huge children’s playground on the western end of the park that includes play stations, slides, rope climbing, space nets, and basketball courts.

Kayaking and other water sports equipment are available for rent during the day.
Only one bus services Pasir Ris Park at this time. Bus 403 stops there from the Pasir Ris Bus Interchange. 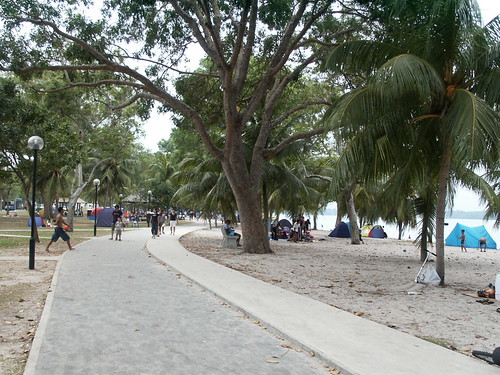 Changi Beach is a great place for overnight family picnics. Barbecue pits, campsites, fitness stations, and restrooms are available for use. There is also a children’s playground in the area. 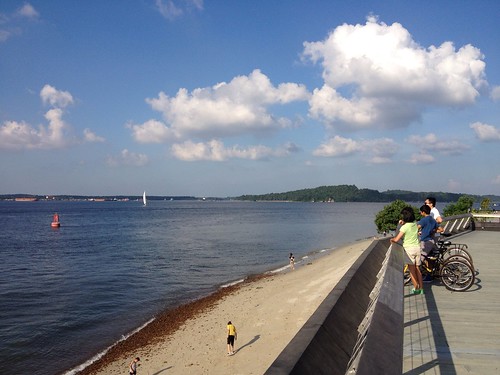 Located in northeast Singapore, Punggol Point Park and Punggol Beach can be reached from Upper Serangoon Road, which begins in the Potong Paris area by Punggol Road. Punggol Point housed numerous seafood restaurnts in the 80s and 90s; the area is still under development today. Visitors enjoy holiday camping at the Holiday Camp at Track 19.

Also known as Labrador Park, this rocky sea-cliff is the only one of its kind that is accessible to the public. It is located on the southern part of the main island of Singapore. The beach here is strewn with rocks, and thus isn’t suitable for swimming.

Singapore is also comprised of several offshore islands which also offer a variety of beaches to spend the day at. 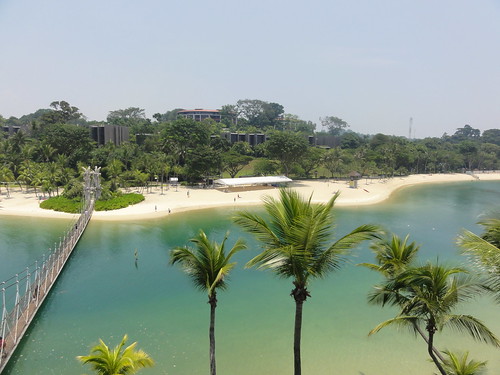 Sentosa Island is the most popular of these islands, and its famous beaches are: Palawan Beach, Siloso Beach, and Tanjong Beach.

Sentosa Island, being an extremely short monorail or cable car ride from HarbourFront, is easily accessible. You can even walk there in 15 minutes along the newly opened boardwalk.

Palawan Beach can be accessed from the southbound path. The most popular of the three beaches on Sentosa, Palawan is beautiful, clean, and it looks very natural. Don’t miss a visit to this family-friendly beach. Boasting interesting shops, great restaurants, and beautiful sandy beaches, Palawan offers something for beach lovers of all ages.

You can get there by crossing over a rope bridge from Palawan’s main beach. Once you’re there, take a moment to enjoy the view by looking back towards Sentosa’s mainland.

This is where the jet set come to have fun.

Siloso offers themed bars and restaurants, volleyball, and whirlpool baths on the beach. Volleyball courts on Siloso are free to use and are available on a first-come-first-serve basis. Skim-boarding, kayaking, roller blading, cycling and other beach activities are also on offer here.

The quietest of Sentosa Island’s beaches, Tanjong Beach is a favorite with beach lovers who are looking for peace and quiet.

Pulau Ubin is home to the last ‘kampung’ village in Singapore. Wandering around this island is like taking a step back into Singapore’s past. Life here is very similar to what it once was in the 1960s.

Pulau Ubin can easily be visited in a day. Wander or cycle down is beautiful rustic roads, check out its secluded beaches, or explore some of the overgrown rubber plantations on the island.

Admission to the island is free. Boats to and from the island only operate during daylight hours from 8:30am to 5pm.

Kusu Island is a holiday island resort located 5.6 kilometers of the southern end of the main island of Singapore. Kusu means “turtle” or “tortoise”. Legend days that there was once a magical tortoise who turned itself into an island to save two shipwrecked sailors.

The island has numerous beaches and lagoons, as well as a popular wishing well and Tortoise Sanctuary. Ferries to Kusu Island leave regularly throughout the day from Marina South Pier.

6 thoughts on “BEST BEACHES IN SINGAPORE”